The acquisition by Fuller Smith & Turner of Dark Star Brewing, a 23-year-old stalwart of the UK craft-beer industry, was the talk of Britain’s beer community last week.

That talk was different from the “us and them” conspiracies that are retailed when the likes of AB Inbev and Heineken buy a smaller player, partly because of the clear synergies between the two businesses, and partly because Fuller’s is itself a well-respected, mostly family-owned brewer, comparable in size to one of the larger independent craft breweries in the US.

Nonetheless, there are always common themes when brewing-industry M&A is discussed. The first is the observation that there’s a lot of this going on right now. The second is the dark claim that wicked macrobrewing bean counters pose a threat to craft beer and would like to eliminate it by acquisition. And the third is the anticipation that there must be many years of consolidation ahead of us.

The first observation is undoubtedly correct. There is a lot of this going on right now.

The second is absurd. The multinational beer industry long ago recognised the need to build exposure to fast-growing sectors that are taking its market share. This involves acquiring craft-beer producers, but also other suppliers of goods and services that craft-beer consumers tend to buy, such as the stakes in homebrewing supplier Northern Brewer and the website RateBeer acquired by AB Inbev’s ZX Ventures in 2016. Given the impossibility of acquiring the entire craft-beer ecosystem, these must be considered growth investments – and there are few investors who want to destroy the industries in which they have invested.

The third theme is perhaps the most interesting, and it is the one I will address here. Is there a lot more consolidation on the way? I think there probably is, and that M&A activity could be considerable. But I also think it will be very short-lived.

Why do I think that? Because of what is happening to bond yields.

Data on the number of breweries operating in the UK is surprisingly patchy, particularly further back than 2005. Still, it is clear that, in the 20-odd years before 2005, the number remained steady at around 500, and that the really marked expansion of the industry began around 2008-09.

We see a similar pattern in the more data-rich environment of the US. Because it is more data-rich, however, we can also see that there was a mild “craft-beer recession” in the early 2000s, during which the number of craft breweries declined by almost 8%.

Why were rates rising and falling during these respective periods?

Between 2002 and 2006 the US economy was recovering from the recession that followed the bursting of the dotcom bubble. At the global level, China had joined the World Trade Organisation and the emerging world was bouncing back strongly from a series of balance-of-payments crises. These were apparently miraculous times of non-inflationary economic expansion and near-full employment in the developed economies: few people were willing to give up their safe desk jobs to set themselves up as independent craft brewers.

Beneath the surface, however, vast economic imbalances were accumulating, revealed in the great financial crisis of 2007-09. A short but very deep recession followed, which would probably have been much worse had not the world’s governments and major central banks met the challenge with a large fiscal stimulus and the adoption of “quantitative easing” – the purchase of large amounts of government bonds from the open market using newly-created fiat money.

Over the next eight years interest rates were deliberately suppressed to incentivise consumption and investment over saving. Many in previously well-paid service industries found themselves redundant, with pay-offs and savings to invest – and some took a punt on the dream of becoming, or financing, a brewer. Add in the trends for artisanal products, “locavorism”, and trading down from mediocre wines to similarly-priced world-class beers – all of them middle-class consumer responses to the financial crisis – and you have the recipe for a fourfold increase in the number of breweries.

Take a look at the chart below, which shows the 10-year US Treasury yield again, this time overlaid on the number of US brewing-industry acquisitions made in each year. These include industry deals and private equity deals, full- and part-acquisitions.

Once again, this pattern fits pretty well with the undulations of the bond market. So, what’s going on?

The next chart gives us a clue. It takes the 10-year US Treasury yield and overlays them on the price-to-earnings ratio of the S&P 500 Index of large US stocks. As the name suggests, this ratio tells you what investors are prepared to pay for a share of those companies, relative to the earnings they accrued over the past year. The P/E ratio is a measure of the value of equity.

To understand what’s behind this relationship between bond yields and the value of equity, it helps to remember that, when investors buy equity, they are trying to decide what to pay today for a company’s future earnings.

They can make an informed guess about what those futures earnings might be. But are those future earnings worth the same today as they will be when they are actually earned? No, they are not, for two reasons. First, because of the risk associated with them; and second, because of the “time value” of money. An investor needs to work out what discount they need to demand on those estimated future earnings to account for those two things.

I am going to focus on the time value of money here, partly to keep things simple, but also because, when rates are as low as they have been over recent years, they begin to dominate the discount rate for future earnings.

We all understand that, when we lend money, we surrender the convenience of having it readily to hand. For the most part, interest is our compensation for that inconvenience, which is why we tend to charge a higher interest rate when we lend our money for a longer time. Money now is worth more than money in 12 months’ time.

Therefore, if I wanted to buy the next 12 months’ earnings from your business, which we both agree will be $100,000, you don’t get to sell it to me for $100,000. I take a little bit off for the risk, and a little bit off for the time value of money. If the current one-year interest rate is 2%, that suggests I should pay you just over $98,000. If we halve that interest rate, the present value of the $100,000 that I’ll get in a year’s time is just over $99,000. As interest rates go down, the present value of future earnings – the value of equity, the value of a going concern – goes up.

A government bond yield curve, which is made up from the yields of bonds with different maturity dates, tells us what the current rate of interest is to borrow or lend for different amounts of time. The top chart in the illustration below shows that in June 2016, the rate was 0.5% to lend to the US Treasury for one year. It was 1% to lend for five years, and 1.9% to lend for 20 years.

Now imagine that we are trying to value a business that will deliver a certain amount of earnings for each of the next 20 years. The bond yield curve gives us the discount rate to apply to each discrete year of earnings, to account for the time value of money in reaching a present value. Put all 20 of those values together, and you have the present value of the business.

In the illustration below, I subject the same business to the two different sets of risk-free discount rates shown in the top chart. The first, blue one, corresponds to the US Treasury yield curve in January 1994, and the second, orange one, to the curve in June 2016, when interest rates reached their all-time low. In both cases, the business makes a total of $5m over 20 years, and its earnings grow from year to year in exactly the same way – shown as the grey bars in the bottom chart. 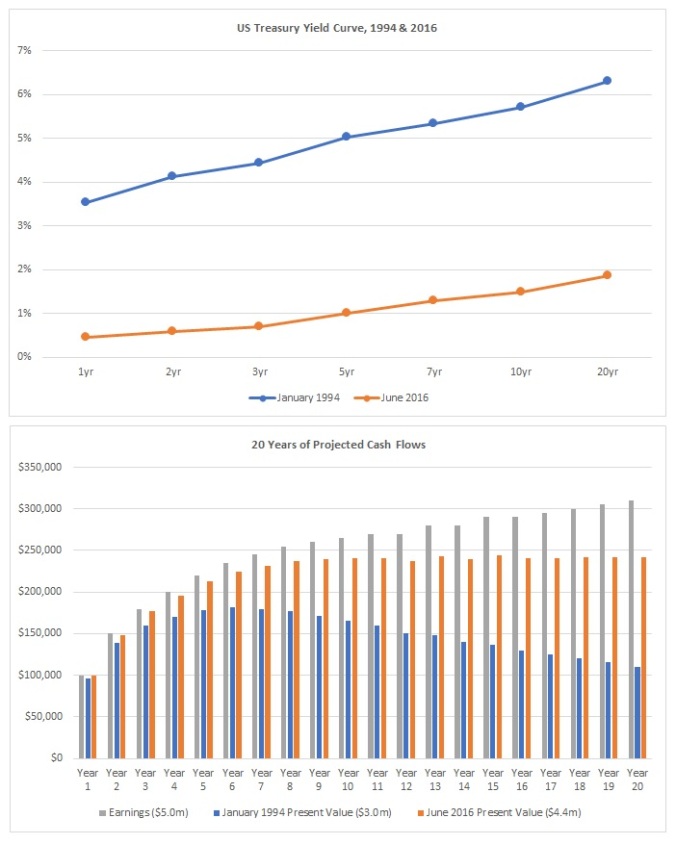 In 1994, with higher prevailing interest rates, this business was worth $3.0m – that’s what you get if you add all of the blue bars together, each of which represents the present value of the corresponding grey bar, discounted with the blue yield curve. With rates at rock bottom in 2016, the same future cash flows were worth almost 50% more, at $4.4m.

Compare the orange and blue bars with the grey bars and you get a sense of what happens as interest rates decline: the business always ultimately earns $5.0m, but as rates decline, a bigger share of that $5.0m moves forward in time. With rates low in 2016, much more of the ultimate value of the business’s earnings was available to the seller, the entrepreneur, up-front. As such, when interest rates decline, there is less and less incentive to wait, or to work, for future earnings.

It should now be clear that it was no accident that the years 2015, 2016 and 2017 saw Constellation Brands hand over an unprecedented $1bn for Ballast Point Brewing, or that there were transactions in the shares of Karbach Brewing, Deep Ellum Brewing, Funky Buddha and Lord Hobo, all of which were established since the financial crisis. With bond yields heading for their all-time lows, this may well prove to have been a once-in-a-lifetime opportunity for brewing entrepreneurs to realise a substantial chunk of the ultimate value of the businesses they had built.

Indeed, since mid-2016, yields have backed up again, rapidly. People who know about these things say that the 33-year downward trend in interest rates is over. The consequences for the owner of my hypothetical business which is set to earn $5m over 20 years? In the 18 months since mid-2016, the present value of its equity has already declined by $670,000, or 15%. That is serious money.

Some months after AB Inbev bought Wicked Weed Brewing in early 2017, it indicated that it would be the last of its US craft-beer acquisitions. Some assume that this was because of the extraordinary craft-beer consumer backlash that met this acquisition. It is equally likely that AB Inbev understands that, if a craft brewer hasn’t accepted its offer at today’s valuations, it probably never will.

That is why I think the window for deal making in the brewing industry could be small and closing. By next year bond yields could be back at levels last seen before the latest round of consolidation began. The year after that, rising rates may finally choke this exceptionally long business cycle and tip us into the next recession. At that point, those who liquidated their equity in the boom years of 2015-18 will be ready to recycle their capital into new ventures – perhaps new brewing ventures.

The rest may be content to hold on, waiting to sell up when the next round of rate cuts delivers the right price.

4 thoughts on “On Bond Yields and Brewery Deals”