Here in Europe, we all grow up understanding one thing about America. Everything is bigger there. The landscapes, the buildings, the cars, the food, the independent craft breweries.

How’s that? The independent craft breweries?

If the words “independent craft brewery” mean anything to you at all, you would probably associate them with a small business, perhaps brewing up to 200,000 hectolitres of beer a year, owned and controlled by a family or group of friends and partners, with perhaps limited brand recognition outside their locality but a strong following within it. You might go further and add associations of high quality, a penchant for idiosyncratic beer styles, or both. 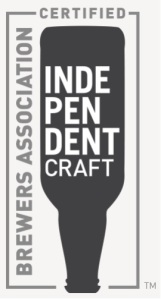 In the US they see things a bit differently. Or at least they do if you believe The Brewers Association (BA), which is the not-for-profit trade association that sees itself “promoting and celebrating the small, independent, traditional and innovative culture of American craft brewers (sic)”.

Last week the BA introduced its Independent Craft Brewer seal. Any brewer with a Tax and Trade Bureau Brewer’s Notice that meets the BA’s definition of an “independent craft brewer” can license the seal for their packaging, free of charge.

The definition has three pillars: size, independence and “tradition”. The tradition bit is about screening out manufacturers of flavoured malt beverages that the BA does not consider beers. The size and independence criteria are more questionable.

The BA thinks a craft brewery can produce up to six million US barrels of beer per year. That is a lot of beer. As its own definition points out, it is a whopping 3% of total annual US beer sales. This leads to deliciously absurd tautologies, such as the claim that 40 of the 50 biggest US breweries by sales volume in 2016 were “craft brewing companies”.

For some context, consider that the UK’s biggest domestic brewers – the likes of Marston’s, Greene King, Hall & Woodhouse, Shepherd Neame and Fuller’s – tend to push out between 200,000 and 500,000 barrels a year (150,000-450,000 hectolitres). Brewdog, one of the biggest and savviest of the breweries that most drinkers would recognise as “craft”, makes less than 200,000 barrels. When Chancellor Gordon Brown halved duties for small breweries in 2002, the threshold was 5,000 hectolitres, around 3,000 barrels.

In Belgium, Palm Breweries and Duvel Moortgat are the local big guys, each making less than 1.5 million hectolitres a year, or about 1.3 million barrels – and Duvel is now an international business.

To my mind, while many of these breweries make some great, even classic beers, and some own genuine craft breweries, their main business lines are all “industrial” rather than “craft” brewing.

It’s simply not economical to produce this much beer and have the bigger share of it be of the very highest quality, specialist, or idiosyncratic – the things that many of us associate with the term “craft”. Rodenbach Grand Cru and Fuller’s Vintage Ales are among the finest drinks in the world, but they enhance the brands and reputations of Palm and Fuller’s, respectively, rather than powering their bottom lines.

Apparently, however, an American craft brewer can be 10-times bigger than these European industrial types.

Perhaps it has something to do with the fact that the US is so much bigger than the UK or Belgium? If we ditch my prejudice that you can’t produce 500,000 barrels of mostly highest-quality, specialist, or idiosyncratic beer a year economically, that explanation could make sense.

But that doesn’t seem to be what’s going on. The top two “independent craft brewing companies” in the BA’s list are up in the four million barrels-plus bracket, but everyone else is a long way behind. Come out of the top-five and everyone is below 500,000 barrels. Outside the top-10 most are below 200,000. Needless to say, there are many hundreds of BA members outside the top-10.

It turns out that American craft breweries are not thunderously huge, after all. Indeed, until 2011 the BA defined craft brewers as having a maximum ouput of two million barrels, in accordance with the “small brewers” definition for the Reduced Federal Excise Tax Rate. It is almost as though the six million number has been chosen keep the top-two “independent craft brewers” in scope.

Perhaps I am too cynical. Perhaps size isn’t everything. Perhaps “independent” is the more important criterion.

Independence isn’t magic – if you prefer Erdinger over Franziskaner then, frankly, you need your taste buds tested – but it is probably true to say that it is more important than size for concerned consumers.

No doubt the BA’s Independent Craft Brewer seal will bring some clarity and transparency to that.

I am sorry to have to disappoint you again.

Here is the BA’s tortured definition of “independent”: “Less than 25 percent of the craft brewery is owned or controlled (or equivalent economic interest) by an alcoholic beverage industry member that is not itself a craft brewer.”

That suggests that as long as you don’t make alcoholic beverages, you’re in the clear. McDonald’s could buy out every single brewery sporting this new seal, and the next day they would still qualify for it. Or perhaps this sweep up would appeal more to Amazon, which just gobbled up Whole Foods?

To be fair, as far as I am aware no BA members are owned by a large non-alcoholic beverages concern – yet.

However, while the biggest of the BA-recognised independent craft breweries, D. G. Yuengling & Son, has been family-owned for nearly 200 years, the second-biggest, Boston Beer Company, has most of its shares traded on the New York Stock Exchange. Founder Jim Koch owns all of the Class B stock, and with it all of the voting rights, but does that make the company “independent”? Institutional stockholders can certainly signal their feelings about how the business is being run (and, boy, have they been doing so over the past couple of years). In any case, the BA definition speaks of “equivalent economic interest” as well as “control”.

Move further down the BA’s list of craft brewers and one can find several owned by holding companies and umbrella companies, often established by other craft-brewing enterprises for perfectly sound business reasons. But there are also some outright private equity-owned or capitalised breweries. Again, while most do not appear to breach the part of the definition concerning non-alcoholic beverage industry membership, can a business genuinely be considered “independent” amid the presence of so much institutional capital?

There are even examples that appear to breach the letter, as well as the spirit, of the definition. The excellent Anchor Brewers & Distillers has, since 2010, been owned by The Griffin Group, an investment and brand-consulting company which, while clearly not a craft brewer, does (superb and valuable) work exclusively in the alcoholic beverage industry.

All of this raises the question: “If we started with a blank sheet of paper and no external pressures, would we be forced to make our definition of an ‘independent craft brewer’ so convoluted and full of holes?”

That question makes me think of two equivalent seals that are familiar to all lovers of Belgian beer.

The first is the one denoting that you are a Belgian Family Brewer. The definition is simple: you must be family-run, completely independent, and brewing in Belgium for at least 50 years continuously. There are 20 members (22 until last year, when Palm and Brouwerij Bosteels were removed for flunking the criteria).

The second is the one denoting that you make authentic Trappist products. When it comes to beer, that means the brewery must be within the walls of a Trappist monastery, of “secondary importance” within the monastery, and run not-for-profit by the monks themselves, or under their supervision. Again, it is pretty easy to tell which breweries qualify, and there are currently just 12 worldwide.

These definitions are simple, exclusive and ruthless. By contrast, the BA’s definition of an independent craft brewer is over-complicated, over-expansive and over-forgiving.

The six million-barrel threshold excludes only the top-three brewers in the US – and even Pabst almost makes the cut, nowadays. The independence definition is breached in the spirit and in the letter numerous times. One thinks of Voltaire’s acerbic quip about the Holy Roman Empire.

In short, it is difficult to escape the conclusion that this definition has been drafted to keep one very big brewery in scope, and to allow virtually any US company outside of AB Inbev and MillerCoors to own a craft brewery and call it a craft brewery.

The definition itself was harmless. Putting it out into the market in the form of an authoritative-looking seal is anything but, because it forces genuine small, independent, local breweries to adopt that definition or risk consumer suspicion or assumption that they are owned by one of the international mega-brewers. It drags these breweries into a 20 year-old marketing spat between one mega-brewer and one merely extremely-large brewer. And it does not represent those aspects of the brewing industry that a normal consumer would associate with the words “small”, “independent”, or “craft”.

The international mega-brewers, and AB Inbev in particular, have been acquiring a number of well-respected craft breweries over recent years. It is beyond the scope of this article to discuss whether this has had a negative, positive or neutral effect on the beer-industry ecosystem in general (US beer industry data suggests that the answer is more complex than the facile “evil empire”, “us and them” rhetoric one often overhears). Suffice to say that it poses a substantial challenge to the concerned consumer, a challenge that arguably needs to be addressed, and to which the BA ought to rise. With their “independent craft brewer” definition, however, and especially with their new seal, they have only compounded that challenge.

It is up to the more reflective beer consumer to ask why that is.

Which brings me to an afterthought.

There is one other beer-bottle seal that this episode reminds me of. Some years ago, the UK’s Campaign for Real Ale (CAMRA) introduced its “CAMRA says this is Real Ale” stamp of approval for bottle-conditioned, unpasteurised brews.

It never really took off. It coincided with the point at which craft breweries started showing that pasteurising, kegging and canning beer did not mean taking all the flavour and character out of it. It ignored the fact that bottle-conditioning was the norm for all but the most industrial Belgian beers; that most UK brewers who sold bottle-conditioned ales already happily told you so on their labels; and that even if they didn’t, all you had to do was look inside for the yeast.

Most of all, it was an attempt to take a term that means something important in the British cask-ale tradition and stretch it to somewhere it really didn’t belong.

This is what happens when terms like “real ale” become things in themselves, rather than standing for something substantial that we can all understand. The same thing has happened to the term “craft beer”. Words slipping from their moorings is a symptom of big business and big marketing – all that “lifestyle” and fanboy stuff that tries to fool you into thinking it’s not about big business and big marketing.

The remedy probably isn’t some kind of seal put out by a self-declared industry body. Even with the best intentions, no seal can ever define precisely what you are looking for, as an individual concerned consumer. You need to taste, obviously; but also to be curious, to look past the funky, punky, or faux-sophisticated stylings – to get your smartphone out, if necessary.

And brewers themselves can help to keep us informed, seal or no seal.

I have recently been enjoying some beers from New Glarus Brewing. It makes about 300,000 barrels of outstanding beer each year, most of which is “drunk indigenously” in Wisconsin. Its labels proudly proclaim it to be “Employee Owned”.

5 thoughts on “A Beer by Any Other Name”