The last brew day I reported here concerned the creation of my Coffee Stout, “Espress Yourself”—which, by the way, has matured out of its youthful earthiness to become a smooth, creamy, mocha-like indulgence.

I have been busier than that suggests, however.

Since then, I have brewed up a batch of aromatic, Cascade-hopped Pale Ale for a christening party thrown by the same work colleague who commissioned a seasonal spiced beer from me last Christmas, as well as a more traditionally bitter, Pacific Jade-hopped Pale Ale for a charity fair I will be selling at in a few weeks’ time. More notable, and worthy of logging here at Pursuit of Abbeyness, is another beer made for the same charity fair: a Cherry Wheat Beer that I have called “My Cherry Amour”.

This being my first fruit beer, it came with a number of questions. What should the base beer be? How much fruit would I need? Would the fruit need to be treated or processed in any way? At what point should I add it to the brew? And how much fermentable sugar would the fruit add to the wort—and therefore how many potential points of alcohol by volume would it add to the beer?

For the base, I went with tradition and chose a very basic American Wheat Beer. While brewers increasingly make fruit IPAs, the addition of fruit to Lambic and, latterly, to Belgian or American Wheat Beer, makes intuitive sense: the tartness of these beers is a natural complement to the sweetness of the adjunct fruit.

The amount of fruit to add depends upon the type of fruit used. Most brewers agree that big-flavoured cherries add a lot of fermentable sugars to a wort but a surprisingly subtle flavour, and that a large ratio of fruit-to-wort is therefore required—perhaps as much as five kilograms for every 20 litres. I decided to err on the side of subtlety, and get a good balance between malt sugars and fruit sugars, by adding 3.5kg of dark, sweet cherries.

Any fruit going into beer will need to be sterilised in order to supress bacteria, fungus, yeasts and other microflora active on its surface. I used frozen cherries: that process is likely to have destroyed most of those potential contaminants, as well as breaking down some of the fruit’s cells to enable an easier release of its sugars. Nonetheless, I also boiled the cherries for 15 minutes as an insurance policy, which raised yet another question: would boiling release the cherries’ pectin polysaccharides and leave me with a gloopy jam, either at the boiling stage of later, in my fermenting wort? To prevent this, some brewers, following the example of home winemakers, recommend an addition of pectolase, an enzyme that breaks down pectin strands. I gambled with leaving that out and am happy to report that the combination of freezing and a brief boil was sufficient to destroy rogue microflora but not sufficient to make jam. 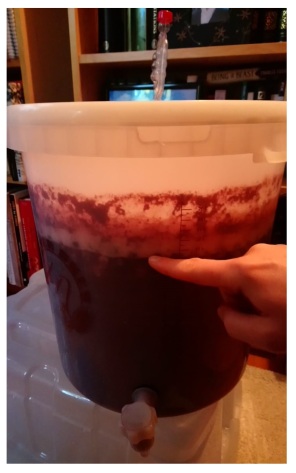 There are three different stages at which brewers can add the cherries to the process. No-one seems to add them to the mash, but many say they add them to the boil—usually for the last 10-15 minutes. Others prefer to add them to the primary fermentation, still others to the secondary fermentation. I wanted to keep my cherries in contact with my wort for as long as was practical, in order to increase the possibility of the finished beer taking on some tannin character from the fruit’s skins and stones. That ruled out adding them to the boil and then filtering them out with the hop matter and other hot break. On the other hand, I had neither the time nor the inclination to mature the fermented wort on the cherries over an extended secondary fermentation, Oude Kriek-style, which would also have required an addition of newly-fermented wort at bottling time.

The best compromise appeared to be a relatively leisurely, two-week primary fermentation on the fruit. After two days of furious activity as the yeast greedily consumed the abundant fermentable sugars, the beer rested for the remainder of the fermentation period.

Ascertaining the amount of fermentable sugars that the cherries would add to the wort is necessary to estimate the ABV of the finished beer.

To do that, the brewer needs to know four things: how much wort is being fermented; how much fruit is being added; how much sugar the fruit contains and how much of that is likely to be released into the wort; and what the fermentable extract potential of cherry sugars is, expressed in units of specific gravity. 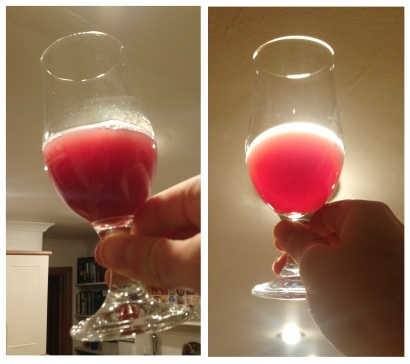 After one week and two weeks in primary fermentation

I was fermenting 20 litres of wort, with 3.5kg of cherries. The packets that the cherries came in told me that they contained 12.8% sugar, and most brewers estimate that around 80% of that will be recoverable when the fruit is added to primary fermentation. That indicates that the cherries will add 80% of 12.8% of 3.5kg, or 358.4g, of fermentable sugar to the wort.

To estimate how many gravity units the cherries will add to the wort, therefore, I need to multiply the weight of fermentable cherry sugars by its extract potential, and then divide the result by the volume of the wort.

With a measured specific gravity of 1.060 for my wort, I therefore estimate that the specific gravity of my wort-plus-cherry mix to be approximately 1.067 (rounding up slightly). The wort attenuated down to 1.010, which means that the ABV of the wort would have been 6.56%, and the ABV of the wort-plus-cherry mix is 7.48%―indicating that the cherries added close to one percentage point of ABV to the finished beer.

The fresh, unconditioned beer is vinous, earthy and funky, with a sudden burst of cherry-fruit sweetness in the finish. It is a promising flavour profile that will benefit from a good dose of carbonation. I primed it with a generous 150g of dextrose, aiming for a lively, Champagne fizz.

I look forward to the first taste in a few days’ time, and feel confident that it will be getting into its stride by the time of the charity fair at the end of November, perhaps reaching its full potential next spring.