I have brewed coffee stouts before, but to be honest I have been a little half-hearted about it. Brewing up a big pot of medium-strength filter and tossing it into the boil, for example. This time around, I wanted to get the full-on caffeine buzz and threw an entire 225 gram pack of aromatic, medium-roasted Colombian beans, gently cracked and sanitised with boiling water, straight into my fermenting vessel.

With primary fermentation now furiously underway, the aroma is riotous.

In addition to this bolder approach to the coffee, this brew is significant because it is only the second time that I have used my new Speidel Kellermeister 30 litre conical fermenter, and it is the first time that I have attempted to chill my wort by means other than an ice bath, with my new Speidel stainless steel immersion wort chiller. Both were purchased from Brew UK. In this article I offer my initial thoughts on both products.

Riotous aroma: coffee beans at the base of the conical fermenting vessel

The conical fermenter is exceptionally well-made in tough, food-grade plastic. With its wide open top and detachable stand it is very easy to access and clean. The combination of the conical bottom and the lower outlet tap makes it simple to crop flocculated yeast for re-use: I have successfully done this, and it should represent a substantial saving on yeast over time, assuming I can get two generations from every single Wyeast liquid yeast pack. Some users report yeast jamming the bottom tap, but while the aperture does look quite tight this was not a problem for me.

Removing spent yeast and trub from the fermenting vessel two or three time during the week or two of primary fermentation allows the wort to clear, which means that racking can be done – with a little extra care and attention – straight from the upper tap that sits just above the conical section. This worked pretty well on my first brew with this fermenter. It represents a significant improvement on my previous technique of decanting into a secondary vessel, which ran the risk of excessive oxygenation.

The taps perform very well: even at maximum pressure inside the vessel, in the first three days of fermentation, there have been zero leaks.

The fermenter also boasts a built-in thermometer that sits in a small heat well that penetrates the vessel. Although the dial is fairly crude, a comparison with my electronic thermometer suggests that it is pretty accurate. It has been an eye-opener, revealing just how warm the fermenting beer gets in the early, most active stages of the yeast’s work. I anticipate that this will be most useful in the winter, when cold nights necessitate the application of a heating belt to maintain optimal temperature. Until now, my temperature regulation has been largely guesswork.

The final innovation on this fermenter is the lid. This sits in a circular well in the top of the vessel. The idea is to fill that well with sanitised liquid and let the lid float upon it. That liquid barrier does the same job as the “bubbler” in a traditional airlock.

I am not sure what the advantage of this lid is, in comparison with an ordinary seal. Unfortunately, to my mind, there are some disadvantages.

First, in my airlock I would tend to use vodka rather than water, because I know that it will be bug-free and will not contaminate my beer should any spill in. Adding vodka to this fermenter’s well means using a lot for each brew and, over the course of a week or two, much of it evaporates, leaving the well in need of a top-up.

Second, the bubbling of the lid is difficult to perceive, particularly as the fermentation reaches its conclusion. That not only takes away some of the fun of watching my yeast at work; it also removes one of the more useful indicators that primary fermentation is completing and that it is time to take some specific-gravity readings.

As you can see from my picture, I attempted to replace this lid with another one that takes my old airlock, weighed down in the hope that this would create a good enough seal to force the carbon dioxide emissions out through the bubbler: unfortunately, even with the beer swirling violently with yeast activity, the bubbler was unmoved – clearly, gas was escaping between the fermenting vessel and the lid.

I will give some more thought to this, as the lid-and-well set-up just doesn’t convince me.

The lack of a good seal on the top of the fermenting vessel means that I am unable to use the simple “agitation” method for oxygenating the wort ready for pitching the yeast. Deep-down, I know that this is not the best method of oxygenation, and some day I will invest in a proper wort aerator. Nonetheless, agitation seems to have done the trick hitherto, and now that option is unavailable to me.

My solution is to chill the wort before decanting it into the fermenting vessel, so that the decanting itself serves to oxygenate it. 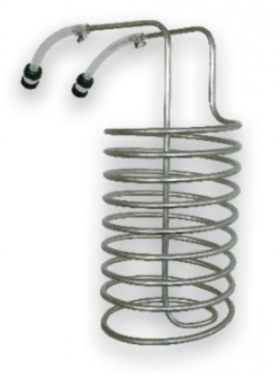 That solution triggered the purchase of my first wort chiller – something I had been meaning to acquire for some time, given the frustrations and risks associated with waiting five or six hours for an ice bath to complete the job.

I have opted for the simplest solution: an immersion chiller. This is a coil of stainless steel tubing that sits inside the wort and connects to a hosepipe system, allowing cold water to flow through and set off a heat exchange. The major disadvantage of this kind of system is the volume of water it uses. This is somewhat offset by the fact that the Speidel chiller connects easily with a garden hose: once a couple of watering cans of hot water have been drawn off, the water is cool enough to go straight onto plant beds, eliminating any waste.

Is the system effective? The wort chilled from around 85°C to 35°C in just 20 minutes, but then it seemed to get stuck. I should have done some reading first: it appears that gently swirling the chiller through the wort in these latter stages helps a lot. This stands to reason. When the wort is super-hot, the temperature differential between the wort next to the chiller and the rest is great enough to agitate a lot of movement in the liquid, but that is not so much the case when the temperature begins to equalise. I will give the swirling method a try next time.

Two birds, one stone: chilling wort and watering the garden

Should one pass the cold water through as fast as possible, or as slow as possible? Common sense suggests going slow: the water being drawn off appears to be hotter the slower the flow, and, after all, that would seem to be heat that is no longer in the wort. The laws of physics suggest something else, however: the temperature of the entire coil should be kept as cold as possible to maximise the differential with the wort. A slow flow allows the water inside the latter part of the coil to reach a temperature that is too close to that of the wort.

To cut a long story short, the most efficient cooling would probably be achieved with the fastest flow possible, helped along with some gentle agitation through the wort.

This chiller is big enough to deal with a 50 litre batch, connects easily to a hosepipe system, and is very easy to clean – a good scrub with soapy water and it’s done. With a little practice it should prove a valuable addition to my brewing set-up, and help me make the most of my new fermenting vessel.

Next time I use it, I hope to be celebrating with a big glass of frothy, bitter and aromatic coffee stout!

2 thoughts on “Brew Day!… “Espress Yourself””