One of the many unanswered questions raised in the Book of Genesis concerns how Noah managed to get lions to lay down with lambs, dissuade leopards from lunching on lemurs, and make everyone to learn to love the lice and the leeches during their year or so on his ark.

However it was done—and subsequent shenanigans suggest that, for the handful of humans in this floating zoo, alcohol may have played a part—the achievement provides a lesson for our fractious times.

With that in mind we clamber aboard The Golden Ark, a micropub established in January by Maria and Matt Emmett in the not entirely magnetic location of Selsdon, a sub-suburb of the suburban would-be city of Croydon, south London.

An excellent and eclectic selection

It is a Friday evening, and the Ark echoes with the to-and-fro of a score of Selsdonites. If a score sounds like a crowd for a micropub, understand that this place is not really “micro”: though not 300 by 50 by 30 cubits, exactly, it is the size of a decent high street convenience store, minus the shelving, having been a little stationery shop in its previous life.

In a pleasing paranomasic permutation, 186 Addington Road has progressed from drawing materials to drawing pints.

From drawing materials to drawing pints

The Golden Ark offers an excellent and eclectic selection of beer.

We drank a silky-smooth Stout and a fruity, astringent Battersea Rye from Wandsworth’s Sambrook’s Brewery; a Plum Porter by Wantsum Brewery; but also unapologetically “crafty” specimens such as the Cacao Lager produced by the Tottenham shipping-container eccentrics Hale Brewing and a “Milkshake Table Beer” by Wilde Child Brewing of Leeds. 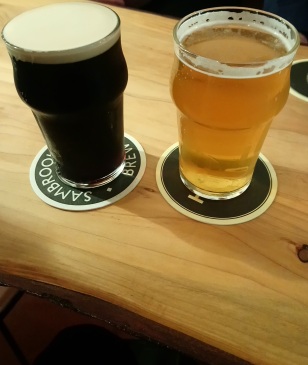 The Ark has four rotating cask beers available, six keg beers (always including a local lager, the proprietors claim), and 50 or 60 well-curated bottled and canned beers from a range of local, national and international brewers. If you’re into cider or perry, they seem to have three or four of those on tap at all times, too. It even boasts a house beer, The Golden Ark Golden Ale, whipped up at the UBREW facility in Bermondsey.

The beer menu is well-curated, then, but not self-conscious or snooty.

If you want a Cherry Saison, they’ve more than likely got one for you. If a Bitter or even a Mild is more your thing, look no further. In The Golden Ark, the CAMRA lions and the craft-beer lambs lie down harmoniously. The Emmetts stride purposefully into the Noah Man’s Land between the booming social-media guns of the Morris-Dancing, tankard-waving cask cohorts and the be-whiskered steampunkery of the craft-beer cavaliers, inviting all sides to take their best shot.

Or maybe they don’t. Maybe this is home territory to them, here in their own Noah Man’s Land between inner-city taproom and country pub, with little by way of competition except a dreary old Wetherspoons. Maybe their punters are just ordinary folk, too busy being grateful for the sudden appearance of a good beer outlet on their doorsteps to worry about ideological purity, or modern beer culture’s vanities of small difference.

Lemurs will leap aboard with leopards if the alternative is to drown in a rising sea of routine, watery suds.

Are you likely to be among them? Not unless you live nearby. Unlike Noah’s Ark, The Golden Ark is hardly a build-it-and-they-will-come sort of enterprise.

That said, consider this white-paged post to be like the dove, set loose from the Ark’s rolling and pitching timbers, seeking signs of life—and signs of longing for London’s local lagers. 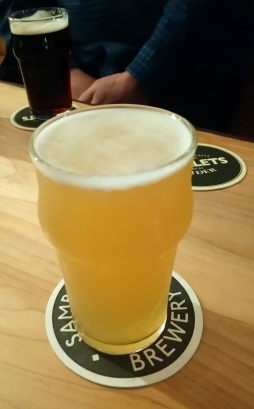