This is how Oregonian homebrewing legend Denny Conn describes his brewing philosophy: “Make the best beer possible while having the most fun possible while doing the least work possible”.

That can sit alongside Friedrich Nietzsche’s pithiest philosophical aphorisms. It appeals to my sense of self as a homebrewer: elsewhere, I have described myself as a “low-tech maker of high-intensity beers”. It is also an optimisation problem, which appeals to the part of me that writes about investments and portfolio management for a living.

“I’m lazy,” Mr. Conn confesses. But he overcame that laziness because he saw that brewing “combined [his] loves of cooking and science”.

I, too, am lazy. I prefer eating over cooking. I laud science as a useful way of thinking about the world, but would not claim to be a scientific thinker. Were I a chemist, I would better understand what α-amylase and β-amylase are doing in my mash tun. Were I a microbiologist, I might crop and cultivate my own yeasts instead of outsourcing the process to a laboratory. And were I a mechanical physicist, I wouldn’t do my back in heaving 20 litres of wort up onto my stove.

More knowledge will always help to make one a better practitioner, but as Mr. Conn observes, there are those “most fun” and “least work” variables to consider, too.

Which takes us back to those complexities and contradictions. The three variables that Mr. Conn challenges us to optimise are deceptively simple, especially the first. Surely all of us can tell when one beer is better than another? There is no need to account for personal taste here: ultimately, the homebrewer brews to satisfy him or herself.

Even so, can we truly tell ourselves that the four weeks spent creating a near-perfect, gently-hopped English Summer Ale were better spent than the 18 months invested in an heroic failure of a Flemish Red, oak-chipped and Pediococcus-soured during an epic secondary fermentation? To be a homebrewer is to fail. A journey can be more sublime than a destination, heroism more noble than success. Satisfaction and fun are not the same thing.

It is also true that work and fun are not mutually exclusive. If they were, hobbies like homebrewing would not exist. Fun seems to be the sum of what we get from the work we put into our hobbies and the end result of that work – with the acknowledgement that there can be “negative work” as well as “positive work”. You know what I mean: work that takes you further from your end result, because it is clumsy or mistaken; work done to fix those mistakes… or just the boring-but-necessary stuff. I have never heard about a homebrewer who gets a kick out of sanitising her fermentation and bottling equipment: if she exists, the anthropologist in me would love to chat about it over a (scrupulously sterile) goblet of IPA.

My first 13 beers were made using an improvised mash tun fashioned from an insulated coolbox fitted with a tap, over which I taped a small colander. 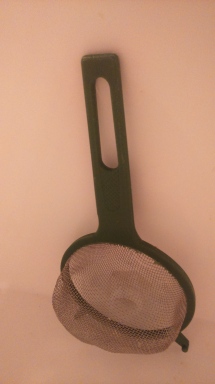 It didn’t really work. The box was a little too small, which meant that I spilt grain on the floor as I poured it into my brewing liquor. I had to fix the colander over the tap’s aperture with sticky tape, which sometimes detached itself in contact with hot water and always left a gloopy residue that was impossible to scrub away. Invariably, lumps of grain found their way through the mesh and into the tap, slowing my sparge to a dispiriting trickle, at best, and a mocking once-a-minute drip, at worst.

My first ever sparge took six hours. That may have resulted in an awesome level of brewhouse efficiency, but for all I know it played havoc with the α-amylase and β-amylase activities, too. At any rate, I’m pretty sure that trying to unblock the tap by taking a deep breath and blowing back through it, or rooting about in the mash in a pair of rubber gloves, can’t have done much good. When this improvisation toppled the coolbox over and sent its contents of sugary brown porridge slopping all over the kitchen floor, it was clear that negative work had reduced the fun quotient well below zero.

Many homebrewers have a flair for do-it-yourself. In no time they can knock up a new bit of kit with some scrap, a hammer and a soldering iron. Regrettably, I am not one of those homebrewers. In the end, I asked the fine people at Brew Builder to construct for me a nice big mash tun with a proper false bottom. Mashing and sparging are now as stress-free and pleasurable as they ought to be. This does not betray me as a fraud, but as someone who recognises and accepts his limitations with serenity (and the deployment of cash).

To be clear, while I do not want to be elbow-deep in a stuck mash, I do want to get my hands dirty. My genuine first beer was a “kit”, but I always knew that the most fun would come from the work of designing grain-and-hop recipes. As Mr. Conn implies, if your homebrewing is not a bit like cooking (and especially cake baking), then you are probably not doing it the fun way.

Life is an S-Curve

Similarly, I find it difficult to understand why anyone would want to homebrew with one of those Grainfather-type “all-in-one brewing systems”, unless the aim is to produce perfect beer every time under a completely controlled set of circumstances. That is a reasonable aim, for sure. But the more noble aim is to test one’s knowledge, skill and finesse, to experiment… and occasionally to fail heroically.

In my other life as an investment writer I often hear that a “second machine age” is getting underway. Generally, this means that robots are becoming sophisticated enough to undertake almost all manual labour, and that artificial intelligence is becoming sophisticated enough to undertake almost all professional labour. Depending on who is describing this phenomenon, it will lead to the utopia of John Maynard Keynes’s “The Economic Possibilities for our Grandchildren”, where we all swan about on the Universal Basic Income generated by our tirelessly obedient mechanical servants, or to a dystopian plague of grotesque inequality, multiple Donald Trumps and never-ending job riots.

Either way, we will definitely want beer. I’m also pretty sure we’ll want at least some of it made by dirty human hands, without the benefit of artificial intelligence. In the more optimistic, Keynesian scenario, the worker whose economic purpose has been displaced by machines will cherish the extra free time he has to devote to his hobbies only as long as we keep the machines at bay in these spheres of activity.

Our grandchildren may have cause to regret the creation of the Grainfather.

Nietzsche didn’t like beer, it seems. Or rather, in a well-known synecdoche he saw beer standing for all that was wrong with the modern “German spirit”.

“Nowhere have the two great European narcotics, alcohol and Christianity, been abused more dissolutely… How much disgruntled heaviness, lameness, dampness — how much beer there is in the German intelligence!… Where would one not find the gentle degeneration which beer produces in the spirit?”

Friedrich Nietzsche, “What the Germans Lack”, Twilight of the Idols, or, How to Philosophise with a Hammer (1889)

Of course, Nietzsche never tasted American hops. But can we really believe that he died without experiencing the zesty tartness of, say, a Berliner Weisse? That is about as far from “disgruntled heaviness” as it is possible to get. And had he only installed a couple of buckets in his home in Basel he might have discovered, in brewing, the familial link between Mr. Conn’s notion of fun, and its complex relationship with positive and negative work, and his own concept of “joy”, entwined with and inextricable from regret and suffering, inherent in the journey rather than the destination.

6 thoughts on “Homebrewing: The Joyful Science”