We went along to BrwLDN at the end of February.

While the newly rebranded Craft Beer Rising festival is still held at the Hipster Ground Zero that is Brick Lane, its crowd was perhaps a little older, on average, than this might imply. It was certainly an older and more sedate affair than Dark & Wild City, which we attended in Leeds last November.

This is perhaps because the festival now competes with a multitude of increasingly sophisticated local brewery taprooms; or because the annual Beavertown birthday collaboration-brew celebrations were going on a little further north; or because of the range of breweries in attendance, which included everything from industry giants such as Brewdog and Goose Island through obscure French farmhouse outfits to some less fashionable names, such as London Fields and Innis & Gunn.

While there were few of the most sought-after rarities that are the mainstays of some festivals, there were plenty of gems on offer. And two of the leading trends in UK craft beer were noticeable prominent: lager brewing, and low- or zero-alcohol brewing.

I started with that second theme.

Lost+Found Brewery’s Ju-Ju Juice is a double dry-hopped session IPA at 2.8%, deploying Mosaic, Galaxy and Citra. It was aromatic and relatively highly carbonated and, combined with its low strength, this did make it seem a little like a straight fruit juice and soda. The slightly grassy, wispy character of the Mosaic hop accentuated this still further.

My first lager of the day was up next.

Pillars Brewery in the East End specialises in lager, and its Rebell Helles tasted authentic—despite the use of American hops. In this case we had Centennial and Citra. The aroma of the beer was not particularly citrus as one might anticipate. There was a hint of the familiar Centennial lemon drop, but, in tandem with the sweet malt background, the most prominent flavour was an earthy mint, which I mistook for something more traditional such as Magnum or Perle. 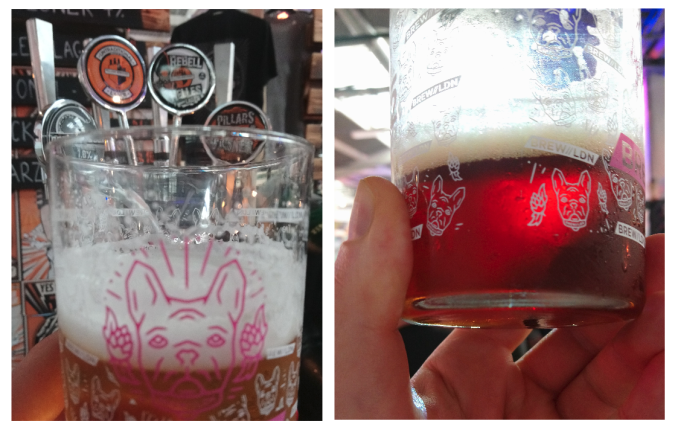 Pillars of the Lager Revival

The plot thickened when I returned for Pillars’ Doppelbock later in the afternoon. This had the expected toast-and-caramel base of the style and, while I cannot be sure the hops are the same, the aromatics are very similar to those of the Helles, and equally prominent. In this beer I got a much bolder sense of lingering diacetyl, in terms of both flavour and texture. I began to wonder whether this might explain the earthy character that I had attributed to hops in the Helles.

We moved on to an unusual stand. The maltster, Crisp, had invited a handful of its clients, all Swedish sour beer specialists, to present their brews at the festival.

I opted for Fruit Train by Fermenterarna Bryggeri, a berry Gose. This was satisfying: busting with red-berry fruit leading into a salty-sour finish. The balance was biased to sweet over sour.

Moving downstairs, we came across our first outstanding beer of the day, and it was from one of a number of French breweries represented at the festival.

Brasserie La Débauche is a barrel-ageing specialist whose Vintage Régalade took me back to my wonderful time in the Toulouse beer bar, Au Poêle de la Bête. This is a blend of wine barrel-aged wild ales, with flavours of red berries and vanilla tussling with an acetic hint of balsamic vinegar, all wrapped up in the big, unapologetic aroma and finish of tannic oak. This was very bold and highly acidic: a beer that impressed at the festival and would likely soften beautifully in the cellar.

After lunch, we moved on to darker beers.

One highlight was Stout Porter from The Five Points Brewing Company, exclusive to the festival and billed as a richer and more robust iteration of Railway Porter, one of London’s true modern classics. I would say this was balanced more to the coffee than the chocolate characteristics of Railway Porter, with a hint of traditional Porter acidity to finish. At 6.2% it was perilously drinkable.

Then we tried our luck at a brewery that we had not heard about before: Birkenhead’s Glenn Affric, a family business with links to Cannich in the Scottish Highlands, shortly to be the location of a site dedicated to wild and barrel-aged beers.

This was a real find. We tried Double Exposure, a collaboration with Salopian Brewery described as a rum barrel-aged Belgian Dubbel, but clocking in at a very un-Dubbel 15.8%; and Kingsway Stout, a Bourbon barrel-aged Imperial monster at 14.6%. We approached these gingerly, knowing that this kind of thing can go to extremes either way. Bracing for a shockwave of solvent fusels, we were delighted to find both beers thoughtfully crafted, carefully fermented and patiently aged. Delicious and fortifying. 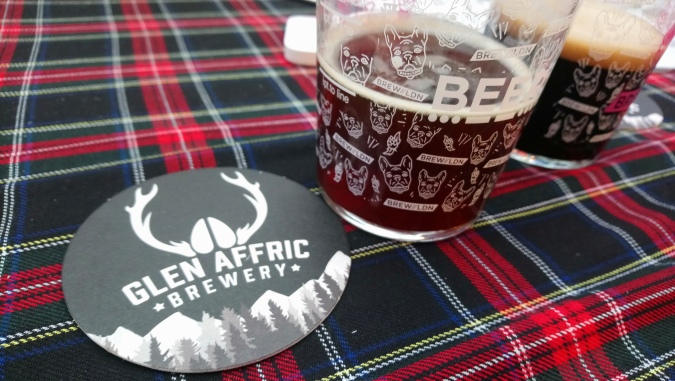 These were not our “best beers of the festival”, however.

That honour must go to Siren Craft Brew’s 2019 edition of Caribbean Chocolate Cake. Cacao nibs and roasted malts give this its deep chocolate base and spicy notes, and subtle lemon and coconut notes seem to be added via the hops, suggesting something like Sabro towards the end of the boil. A spoonful of lactose lends it just enough sweetness to bind all of those elements together into a luxurious, profoundly indulgent beer.

With our tastebuds alive and our heads slightly dulled, we tumbled back out into the late-afternoon light of Brick Lane, and set off home across the city.

One thought on “Lager and Low-Alcohol at BrwLDN”