Imagine my delight, upon taking the first sip of a newly-poured homebrew, when I discovered that I had created a beer that would not be embarrassed to stand alongside Struise Brouwers’ Pannepot or Harvey’s Prince of Denmark.

Now imagine my despair when I reflected upon the series of accidents, failures and tortuous, improvised processes that gave birth to this beer.

When I started “Pursuit of Abbeyness”, I knew I wanted to write about the importance and the joy of serendipity in homebrewing. That was the subject of my second entry, which detailed the many tasty beers I had accidentally made in failed attempts to brew a Strong Dark Abbey Ale in the style of Rochefort 10.

But that blog was all about serendipitous recipes that could easily be replicated and revisited. Faced with a glass of “Memento Mori”, I was forced to ask myself, would it be possible to replicate the process that created this beer?

Would I even want to?

“Memento Mori” began with a desire to create a big, heavy, sweet Barley Wine that would improve with long ageing in my cellar. I brewed the wort and pitched some British Ale yeast on December 3, 2017. The next day, I sat down to write. Before some idle reflections on the passing of time, the seven ages of man and the attractions of pleasures deferred, I offered up a prayer to the brewing gods:

“Right now, I wish my yeast good fortune on its arduous, Xenophon-like journey. If all goes well, I will decant the beer into large bottles for conditioning, before surrendering it to the vicissitudes of time and the Brownian motions of chemistry.”

My wort clocked in at a ponderous 1.120 degrees of specific gravity, enough to hit an ABV of 12-13%, as long as fermentation attenuated the beer down to around 1.025 degrees, as planned.

Now, while this suggested that the beer was already at 10% ABV, an apparent attenuation of just 60% did not seem thorough enough. I applied heat to the fermenting vessel and roused the yeast vigorously every few hours, hoping to bring it back to life. Occasionally the airlock would bubble weakly, indicating some kind of activity.

A week later, I was due to travel to see my family for Christmas. There was no time for racking, so I decided to leave the beer sitting on its trub while I was away.

When I returned, its specific gravity had not budged from 1.046. Short of introducing another fresh yeast or an attenuating agent, there was little more to do. I finally racked the beer a month after brew day, on January 4, 2018, with a meagre 50g of priming sugar—meagre for fear that the suspended yeast might seize ravenously on the residual sugars in the bottled beer and destroy the batch with a series of volcanic eruptions.

Almost three months later, on March 24, I invited some friends around to help brew up a batch of “Pursuit of Abbeyness XII”. I chose this day for the grand first tasting of “Memento Mori”. Bottle-opener poised, we nervously anticipated the hiss that would tell us that the beer had conditioned successfully.

Instead, we were met with a lacklustre puff. “Memento Mori” was all but flat. 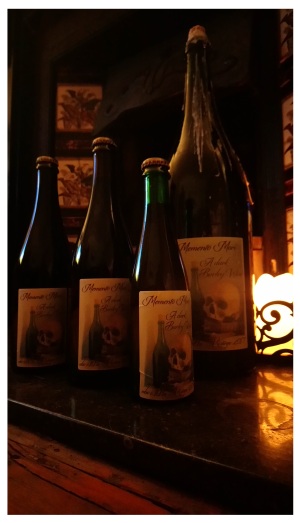 To compound this disappointment, the flavour was highly promising. It was sweet, boozy and unctuous, with a tremendous but not overpowering background of liquorice from the 50g of root added to the boil. All that was missing were bubbles and foam.

Undaunted, I resolved to give it another three months, including a week in warmer conditions with some agitation before the bottles went back down into the cellar.

Did I mash too hot, releasing a larger-than-usual amount of non-fermentable sugars into the wort? Was it foolish to try to ferment such a high-gravity wort with a packet of liquid yeast that I had not propagated into a starter? Did a month in an unheated room in the dead of winter allow too much yeast to drop out of the beer before racking? Was I simply too timid with the priming sugar?

The likelihood is that these were all contributing factors. In any case, with summer now upon us, “Memento Mori” still refused to fizz.

The flavour was too good to tip down the sink, however. It was never in doubt that I would try one last throw of the dice to save this beer.

In making a flat beer, I understood that I had essentially come to the place where all traditional barrel-agers, Lambic brewers and lager brewers end up, due to their prolonged fermentations. As such, I decided to take a leaf out of their brewing notebooks by making up a small batch of new ale to blend with the “Memento Mori”—just as young Lambic is blended with old, or as a mature lager is “Krӓusened” with a touch of live wort, to add carbonation.

In June of 2018, therefore, I made eight litres of simple, unhopped dark-ale wort with a starting gravity of 1.062, fermented it down to 1.010 with some bottom-cropped, second-generation Belgian Abbey Ale yeast, uncapped and uncorked the remaining 12-or-so litres of “Memento Mori”, blended the two beers together, and racked the whole lot one more time—six months after the original brew day.

After two weeks, I uncapped one of the bottles. This time, I was met with the wondrous music of a hiss of escaping carbon dioxide. I had succeeded in reviving “Memento Mori”! It poured with a steady, but still modest foam.

How did it taste?

It was good. Still sweet, but with the liquorice now settling into a perfect subtlety and the black malt umami characteristics beginning to seek prominence. Was there a hint of cardboard, perhaps the price to be paid for the oxygenation the beer had gone through while spending six months in its bottles and being blended with the young ale? Possibly, but it was not intrusive. Moreover, after the blend, this new beer was still coming in at around 8.7% ABV, and there was very little heat or harshness from its alcohol.

It certainly required more time in the cellar, but it was promising to be a decent beer.

There was one more disaster to come.

One of the bottles I filled was a three-litre Jeroboam, stopped with a champagne cork held in with a rather ill-fitting cage. Six weeks into conditioning, that cork was forced out, sending a litre and a half of sticky Barley Wine foaming and puddling across the floor of my cellar.

Ah well, I thought, as I mopped up the liquoricey mess, at least I know this beer is building up a serious fizz. That is precisely what this unctuous brew needs.

Summer holidays came and passed, and as the chill of autumn began to steal out of the evenings’ lengthening shadows, it was time to see how “Memento Mori” was settling in. On September 23, 10 months after the original brew day and three months since the blending experiment, I uncapped another bottle.

The beer gushes a little, now. The high level of residual sugar, as well as the half-kilo of wheat and oats that went into the original brew, has resulted in a beer with long, bubble-forming protein strands, and therefore a handsome foam and a silky mouthfeel. The carbonation is not riotous, but moderate-to-high—ideal for cutting through the ale’s unctuous sweetness.

The aroma is extraordinary: coffee, chocolate, liquorice, rum and dark fruit, but also some deep complexities that one would associate with a much more mature beer—whisky, port, tobacco, leather. On the palate, those aged dark malt flavours carry through to prepare the field for a stupendous battle between salty umami and Christmas-cake-and-liquorice sweetness, which seems to reveal endless layers of shifting combinations. The finish is warming but not hot, boozy but not harsh, with a hint of pepper and spice.

From the cliff edge of ruin, “Memento Mori” had persevered to become one of the two or three tastiest and most sophisticated brews I have made.

I come away from “Memento Mori” with some valuable brewing lessons.

First, to create high-ABV beers that are not too dry and astringent, do not be afraid to push the starting gravity to extremes in the knowledge that attenuation will probably arrest at around 1.025, especially if you mash at a slightly higher temperature. That lesson has already proven useful in my quest to perfect “Pursuit of Abbeyness XII”.

Second, if attenuation has arrested, even at a high specific gravity, you should assume that the residual sugars are non-fermentable and not hold back at the priming stage.

And third, it often pays to embrace serendipity. As I wrote on these pages, trying to define what “Pursuit of Abbeyness” was about: “we usually end up with a beer that intrigues, a beer that we love, rather than the beer that we thought we wanted”.

But it is difficult genuinely to respect that sentiment. The beer I want to make now is a second, bigger batch of “Memento Mori”. But that raises so many questions. Did the long primary fermentation lend the beer its exceptionally clean yeast profile? Did the use of a second-generation Belgian yeast in the young ale greatly influence the flavour? Are the unusually mature ageing flavours there thanks to the oxygenation that occurred through the beer’s crazy production process? Should I pitch the yeast without making a starter again, deliberately impeding attenuation straight through to a low finishing gravity? Would I really have to do a blend of young and old again, or could I get away with a single, long primary fermentation as long as I crop some yeast and mix it back into the racked beer, Krӓusening-style?

Faced with so much randomness and so many decisions, I am glad that I have such a splendid beer to savour while I consider my options. And the more I sip, the easier it will be to acknowledge that, however the next batch of “Memento Mori” gets made, it will never be exactly the same as this first batch.

4 thoughts on ““Memento Mori”: Another Lesson in Serendipity”