An interesting and important new epidemiological study on the association of alcohol consumption and health outcomes suggests we can drink three or four pints of 4% ABV beer a week without exceeding the minimum risk of early mortality.

The bad news is that the findings challenge the idea that “moderate” drinking confers health benefits. This assumption has been questioned in meta-analyses and commentaries for some years, now, and the new study appears to set up substantial statistical hurdles against claims of this type in future epidemiological literature.

On a more philosophical note, implicitly the study asks, is adding an extra pint of beer a day worth foregoing two years of life? Would adding a third or fourth pint compensate for losing five years?

The article in question is “Risk thresholds for alcohol consumption: combined analysis of individual-participant data for 599,912 current drinkers in 83 prospective studies”, by Angela Wood et al, in The Lancet, Vol. 46 (April 2018).

It looks at individual-participant data from three sets of cohort studies in 19 high-income countries (the Emerging Risk Factors Collaboration, EPIC-CVD, and the UK Biobank). Of the 786,787 participants with sufficient information for inclusion, 19% reported not drinking. Of those who were current drinkers, about 42% drank the equivalent of four pints a week or less (100g of alcohol, or 12 UK units), about 50% drank between four and 14 pints a week, and about 8% drank more than 14 pints a week (more than 350g of alcohol, or 40 UK units).

There is a huge amount of statistical heavy lifting in this study, but to my layperson’s eye perhaps the two most important adjustments to the data are the decision to analyse only current drinkers, and the work done to smooth-out within-person variability in alcohol consumption over time to arrive at a long-term average, or “usual” level of consumption for each individual.

Both of these measures seek (among other things) to mitigate “reverse causality” – that is, the risk that ill health, possibly alcohol-related, has caused subjects to abstain from alcohol or moderate their drinking (as opposed to abstention or moderation being a cause of ill health).

The effect of reverse causality is to suggest that abstainers or low-level drinkers suffer less favourable health and mortality outcomes than moderate or even heavy drinkers – the so-called “j-curve” or “u-curve” result. The consensus of the past decade or so has therefore been that moderate drinking confers health benefits.

The authors of the new analysis question that consensus, but also observe that they have likely not excluded all of the reverse-causality biases, and that they therefore “probably under-estimated potential benefits associated with lowering alcohol consumption”.

From 5.4 million person years of follow-up on the 599,912 current drinkers in the dataset, the authors of the new paper recorded 40,310 deaths and 39,018 cardiovascular disease events.

With all of their statistical adjustments in place, the authors found a positive and curvilinear association of all-cause mortality with the level of alcohol consumption, with the minimum mortality risk around or below 100g per week, or 12 units. Looking at cardiovascular events in detail, they found a “roughly linear” association between higher consumption and higher risk of stroke, heart failure, fatal hypertensive disease, fatal aortic aneurysm, and all types of coronary disease except myocardial infarction, where higher consumption showed a positive log-linear association with lower risk of mortality.

In aggregate, the risk of all-cause mortality did not fall further once drinking fell below 100g per week, suggesting that there is little or no benefit from giving up alcohol altogether. For cardiovascular disease other than myocardial infarction, however, the authors report that there were no clear risk thresholds below which lower consumption stopped being associated with lower disease risk. This is the difference between “curvilinear” and “roughly linear” associations.

In short, the “j curve” or “u curve” disappears for all-cause mortality with this new analysis, but arguably remains in place for cardiovascular disease events in aggregate, largely because of the findings for myocardial infarction. The case for an overall beneficial level of alcohol consumption (as opposed to a harmless level) appears to receives a blow from this new contribution to the literature.

It is particularly painful for Pursuit of Abbeyness to report that the study indicates that the association between alcohol consumption and mortality risk appears to be stronger for beer drinkers than wine drinkers, although the authors are quick to observe that beer drinkers tend to smoke more and show “other indicators of lower socioeconomic status”. Apparently, therefore, you’re all right if you’re a middle-class beer connoisseur rather than a lager-swilling pleb. 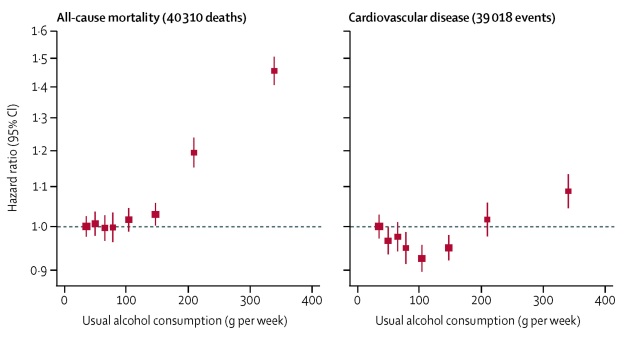 In its accompanying editorial comment by Jason Connor and Wayne Hall, The Lancet anticipated that the drinking levels recommended in this study will “no doubt be described as implausible and impracticable by the alcohol industry and other opponents of public health warnings on alcohol”.

Richard Harding of the campaign group Drinkers’ Voice went on the BBC to claim that the Lancet editorialists wrote that “The never-drinkers fared worse than the heavy drinkers in this study”. That sounds odd because the study deliberately excluded never-drinkers from its analysis.

What the editorial writers were referring to was the authors’ secondary analyses, which did indeed re-establish the u-curve association by re-introducing never-drinkers and ex-drinkers to the sample. Researchers do secondary analyses to show that the results of their primary study are due to their statistical adjustments rather than something screwy in their underlying dataset. Faced with a research paper that labours tirelessly to clean-up some horribly flawed data, Harding ignored the work, pointed at the flawed data and declared: “There, you see! That’s what they are really saying!”

Christopher Snowdon of the Institute of Economic Affairs made a similar mistake  on Twitter, implying that the researchers were hiding the real evidence deep in the Appendix. In fact, a 270-word paragraph in the article explains this secondary analysis, complete with clickable links to the charts.

This sort of thing matters because it shapes or confirms the views of influential commentators who are not epidemiologists or who do not have the time to read these papers.

For example, after one venerable beer writer re-tweeted Harding’s BBC appearance, I tried to explain why the claim that people live to their 90s eating the Mediterranean diet does not challenge this study’s findings, which actually draws upon the self-same set of data (as Italy, France, Spain and Greece figure in two out of the three groups of cohort studies).

More prosaically, it was another instance of the confirmation bias to which all of us are prone.

It has to be said that the hazard ratio-based analysis that constitutes the main part of this study has limited resonance for the layperson, myself included.

Thankfully, the authors have translated these findings into estimates of cumulative survival, at different ages from 40 years upwards, by mapping them onto the detailed mortality component of the U.S. Centers for Disease Control and Prevention’s WONDER database, which records 10 million deaths in more than 305 million individuals in the U.S. between 2007 and 2010. It is a little bit rough-and-ready, then, but this move gives us some idea of the number of years of life we might forego for a given level of alcohol consumption, based on the mortality-hazard ratios found in the study, all other things being equal.

That returns us to the question at the top of this article. Is going from a pint-and-a-half a day to two-and-a-half worth 18 months of life? Would doubling it be worth five years?

To be honest, two or even five years out of an expected innings of 79 seems negligible at first. It’s a mere 6% of one’s life. And given the general vicissitude of things and the pleasure of a wee dram by the fire or a couple of pints with your mates, it seems worthwhile.

Then again, think about what has happened to you over the past two or five years. When you do that, it starts to feel like a long time. Would you consent to being away from your loved ones for that length of time? Were your life a week long, losing 6% would be like giving up the second half of Sunday.

And of course, without life, there is no beer: at a consumption rate of a pint a day, five years represents almost 2,000 pints; 34 years of three pints a day represents 37,000 pints. In pure terms of beer, maybe it is worth foregoing some time, after all?

Human beings generally over-estimate risks to their physical wellbeing. We tend to be convinced that we are much more likely to be mugged in the street than we actually are. We will forego many pleasures should we perceive them to be associated with an immediate physical risk.

But when time comes into play, perhaps our judgment gets skewed the other way?

The concept of hyperbolic discounting, whereby a pound one year from now and a pound three years from now are valued much less by us than they would be according to an exponential discount rate, is well-established in behavioural economics. Even if we acknowledge and accept the probability that it can shave years off of our existence, do we still value today’s extra pint of beer more highly than we should, relative to the value we assign those hundreds or thousands of beers we might have enjoyed in our twilight years?

I do not know the answer. I don’t suppose anyone does. I certainly wouldn’t know where to begin to quantify it. It might be impossible to do so – because, ultimately, beer is good for us in difficult-to-quantify ways. Nonetheless, the question bears thinking about, as more and more evidence suggests that beer is not very good for us in the easier-to-quantify ways.