For the visitor who climbs the four flights of steps that snake their way through Hook Norton’s Victorian brewery, an unexpected sight awaits. At the top, a large room, open to the weather through slatted window shutters, is almost entirely filled by a miracle of metalwork: a shallow bath, some five metres wide by eight metres long, fashioned from a single piece of copper.

The Hook Norton Brewery, nestled in the Oxfordshire village of the same name, still has its coolship. 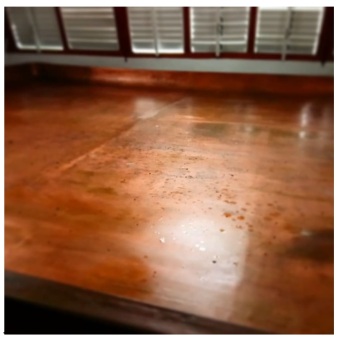 A miracle of metalwork

Readers who know what a coolship is will recognise a perfect opportunity to teach Hook Norton’s vistors some brewing history and science. Would they be surprised to learn how recent our understanding of fermentation is? How different beer would have tasted in 1820 from how it tastes today? How traditions of spontaneous-fermentation brewing still thrive, a century and more later?

Instead, as we reached the top of the stairs on our tour, our guide chose to tell us that Hook Norton’s coolship was no longer in use due to the imposition of “E.U. rules”.

Of course, this is mile-high nonsense.

The European Union has not banned the use of coolships anymore than it has banned straight bananas. I know this because I happened to be standing next to the tour guide in an old T-shirt from Brasserie Cantillon. This traditional lambic producer still uses the coolship up in the eaves of its premises, literally a stone’s throw away from the headquarters of the European Commission in Brussels.

So what is a coolship?

After wort has been boiled to extract the bitterness of hops it needs to be cooled to room temperature, ready to accept brewing yeast. As the name suggests, the coolship is where this happens. It is large, shallow and made from highly-conductive copper to speed up the process. In addition, it was once the place where the wort was inoculated with the wild yeast and bacteria that would go on to ferment it.

The discovery of the role that yeast plays in fermentation in the 19th Century changed all that. It led to the isolation and cultivation of the organism to produce healthy, consistent strains for “pitching” into brewing wort. Thereafter, most brewers, with the exception of those such as Cantillon whose beers depend on the flavours that wild yeasts and bacteria bring, put a lot of effort into keeping every other microorganism out of their very welcoming, warm, sugary wort.

One might say that, through the decades of the 19th Century, the cooolship went from being an essential part of the brewing process to being a source of catastrophic risk.

Our tour guide seemed to know this. A few minutes earlier, she had responded to my question about whether Hook Norton treats its brewing liquor by confirming that it exposes the water to ultra-violet light to eradicate microorganisms. Later in the tour she told us we were not allowed into the fermentation room because the brewery’s open fermenters need to be kept as sterile as possible. She also showed us the modern heat exchanger that cools the wort in a fraction of the time it would take in the coolship, without exposure to the open air.

After the tour, I told this story on social media. The beer journalist Will Hawkes responded to say that he had once asked James Clarke, Hook Norton’s Managing Director and Head Brewer, why he no longer uses the coolship. “I’ve spent years getting bugs out of the brewery,” he is reported to have said. “I’m not about to invite them back in!”

For clues as to what Hook Norton thinks about the E.U., look at the newest design for the bottle labels and pump clips of Flagship, its IPA. It shows a Napoleonic sea battle. A vessel flying the British Ensign fires a broadside into a hapless French Man-of-War – which now flies a tattered flag of the European Union alongside its Tricolore.

“Beers like this are what the Empire was refreshed on,” says the tagline for the beer.

“What the Empire was refreshed on”

This jumbling together of Brexit and the glories of the British Empire is a bacillus that has lain dormant in the English psyche for decades, but is now causing an outbreak of fever in what passes for our political discourse.

Brexit resulted from a monstrous coalition between those who feel threatened by the forces of globalisation that they see embodied in the E.U. project, and those who would embrace globalisation by breaking free of what they regard as the E.U.’s smothering, bureaucratic, protectionist constraints.

The cultural glue that holds this coalition together is the idea of Empire. Empire seduces the latter with its notion of Britain sallying forth to conquer exotic, fast-growing markets, while comforting the former with its sense that Britain might once again control the global economy rather than be at its mercy.

The underlying economic thinking – the imperial mercantile system – is more than 250 years out of date, and was subjected to a devastating critique by Adam Smith, in Book IV of his Inquiry into the Nature and Causes of the Wealth of Nations (1776).

Smith noted that Britain regulated its trade with its American colonies so that certain commodities that Britain did not produce enough of would be shipped across the Atlantic exclusively for the home market. The twin objectives were to allow British merchants to buy low in the colonies and sell high in other markets (the “carrying trade”); and, through the use of distorting duties, to discourage imports of essential goods from other countries “with whom the balance of trade was supposed to be unfavourable”. Both objectives resulted in a “better” overall balance of trade, the essential aim of a mercantilist policy.

Smith argued that Britain was mistaken to be concerned with its balance of trade, rather than its growth rate of productivity. The “colony trade” had benefited British business, he conceded, but that had “not been by means of the monopoly of that trade, but in spite of the monopoly”. The monopoly was most damaging because British business, “instead of being suited, as before the act of navigation, to the neighbouring market of Europe, or to the more distant one of the countries which lie round the Mediterranean sea, have, the greater part of them, been accommodated to the still more distant one of the colonies”.

With the absolute power of imperial purveyance, the British Empire sustained swathes of inefficient economic activity in order to balance its trading account, instead of allowing its capital to flow into businesses that exploited Britain’s comparative advantages. The result was decades of capital misallocation, rent extraction, and a steady decline in productivity, masked by the sheer extent of economic growth that was possible in the under-developed colonies.

By coincidence, this period of decline culminated precisely two centuries later in 1976, when the U.K., bankrupted by loss-making heavy industries kept alive for rent extraction by myopic capitalists and organised labour, turned to the International Monetary Fund for an enormous emergency loan. It had entered the European Economic Community three years earlier. The Thatcherite revolution in political economy would begin three years later.

Still, even if Empire and imperial economics were a busted flush, “Beers like this are what the Empire was refreshed on” is a good tagline, and we should miss an important point if we did not credit the Hook Norton Brewery with trading very effectively upon its Victorian heritage.

The building itself is probably the best-preserved gravity-utilising tower brewery in the country. It is one of very few in Europe that contains a working steam engine, which is occasionally fired up for a brew. And, in the stables behind the brewery, four drayhorse shires are fed and watered, in between trips to replenish the cellars of some of the 37 local pubs in the Hook Norton estate.

But let’s not be sentimental about this. These things are no longer central to the brewing business but are rather elements of the brewery’s diversification into tourism – alongside the brewery shop, museum, restaurant, function rooms and the small-batch experimental brewery that can be hired for “event brewing”. Hook Norton’s surfeit of depreciating capital assets have to pay for themselves somehow.

As well as diversifying, the business has also specialised. Note that when the founder, John Harris, bought the brewery’s 52 acres of land in 1849, the most prized asset was a malthouse that supplied other local brewers – brewing didn’t start for another seven years. However, the brewery stopped malting its own barley long ago, which shows that, when it doesn’t affect the “heritage” feel, this business is happy to focus on its comparative advantages.

Indeed, even the drayhorse deliveries have been subject to hard-headed business decisions over the years: they were stopped in the 1950s and brought back again in the mid-1980s. Today, the fields in which barley and hops used to grow produce hay to feed the horses, whose main job is to attend fetes and shows around the country.

This canny balance between tradition and modernity, and between specialisation and diversification, is maintained in Hook Norton’s core product.

Its best-known beers are its four cask ales. Hooky is a decent amber Bitter; Old Hooky is an earthy variation on the theme with an added dose of Crystal malts; Hooky Gold is a classic, hoppy English Pale Ale; and Hooky Mild is an authentically fruity, estery interpretation of the style. In response to the rise of craft beer, however, a range of keg-friendly ales has been developed in the small-batch brewery that sits next to the storage and racking tanks at the base of the Victorian tower. Among these are the justly award-laden Red Rye, which overlays a full, malty and pleasantly sweet body with the subtle citrus bite of American hops; and Merula Stout, a very dark, coffee-and-smoke accented beer that could have come from any of the young pretenders of the UK’s urban craft-beer scene.

The branding of these crafy keg beers is clever. The names have the ring of beers from the West Coast of the U.S., but the first announces its arrival with the very English-sounding tagline, “Red Rye at Night, Drinker’s Delight”, while the second refers, not to some Californian border town or a species of cactus, but to the common blackbird – and we are told it is “based on an original recipe, handed down through the generations”.

Indeed, Hook Norton makes a lot of its ability to reach back into its records of a hundred and fifty years of brewing recipes. One such record shows that it imported Oregon hops when today’s craft brewers weren’t even a twinkle in their great-great-grandfathers’ eyes.

In short, the Hook Norton Brewery is a microcosm of 21st-Century Britain. It is a modern business using modern technology, but traditional enough to fit, physically, aesthetically and spiritually, into its 19th-Century superstructure. That probably comes with a small loss of productivity and capacity, for which it compensates by diversifying away from its core manufacturing business and into services – services that depend upon the preservation of the brewery’s Victorian heritage, and on the ideas and myths it is perceived to embody.

Delivering beer by horse and dray, like imperial mercantilism, is an economic travesty. Selling it to the the world as part of a seductive myth is, however, a profitable modern business – perhaps even a post-modern business. But it is all too easy to start buying our own myths. Make that mistake, and before we know it we’ll have let the bacillus back into the brewery.

5 thoughts on “The Hook Norton Brewery & the Brexit Bacillus”