Nel mezzo del cammin di nostra vita… That was when I started brewing. Almost four years later I pitched the yeast into my first Barley Wine.

Given its suitability for cellar-ageing, “Barley Wine” has a pleasingly enduring history. It turns up a few times in ancient Greece, notably in Xenophon’s behind-enemy-lines memoir, Anabasis.

Struggling through the snows of Armenia with a hostile force in pursuit, relief comes to the Greek soldiers in the form of some village hospitality that includes “οἶνος κρίθινος ἐν κρατῆρσιν” – “barley wine in large mixing bowls”.

Attractive as the historical link is, the likelihood is that these Greeks were supping a normal-strength fermented grain drink, rather than the strong, aged beers with which we associate the designation today.

This later usage originated in the 1870s as a marketing term to sell Bass’s No. 1 Ale – an Old Ale made to be aged at the brewery before release. Among English brewers, that is how the name is now applied: a malt-dominated beer with a modest hop profile and high ABV, released after ageing and designed to benefit from many more years of cellaring.

Many of my homebrews are high in ABV, somewhat phenolic when new, and deliberately created to withstand or benefit from a year or two in my cellar.

Still, my oldest homebrew is a single, legacy bottle of something I called “Stout Abbot”, which is approaching its third birthday. Making an ale that might require a decade to reach its peak condition is a departure that causes a brewer to mull over much more than the way a beer is put together. When one thinks in decades, the ageing of a beer becomes analogous with the ageing of a man.

For that reason, I named this brew “Memento Mori”.

There are several elements of the “Memento Mori” recipe that should support the beer in its safe passage through time.

First is the high ABV. A grain bill weighing in at 7.7kg for just 13 litres of wort, boosted by a further 950g of lightly-caramelised sugar in the boil, resulted in a starting gravity of 1.120 degrees, or around 28° Plato. Should this come down to 1.010 – 1.015 degrees in fermentation, the beer will have an ABV in excess of 14%. 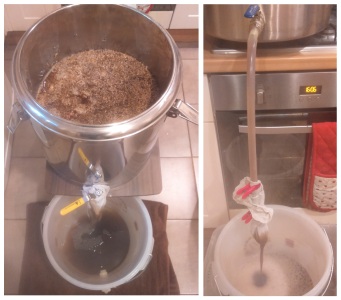 A grain bill weghing in at 7.7kg for 13 litres of wort

That is right at the threshold of what my chosen yeast, an English rather than a Belgian strain, can tolerate.

The encouragement it will need as it stumbles exhaustedly to its final destination – a higher fermentation temperature, a little physical rousing – is likely to release a lot of phenols and especially fusel alcohols into the beer. Unpleasantly spicy, “hot” and solvent-like when young, when oxidised over time these compounds should develop into aldehydes with luscious almond, toffee and caramel flavours.

The beer will be relatively dark. The crystal, chocolate and roasted malts are there to develop into sherry and port flavours, but also to introduce acidity for stabilisation over time.

The hops are of secondary importance. Tettnang and Hallertauer were merely the odds and ends that I had left over in my refrigerator, pleading to be used up.

They are, however, perfect in their very low levels of alpha acids. When oxidised, alpha acids are apt to produce the trans-2-nonenal aldehyde associated with cardboard flavours in hoppy beers. Avoiding this, and getting the fruity, cherry-like flavours of aged hop beta acids instead, would be a desirable result. Perle, also a low-alpha acid variety, was chosen as an aromatic hop to add to the earthy, spicy flavours from the liquorice root, which I hope will age into leather and tobacco flavours alongside the yeast-derived phenols.

Right now, I wish my yeast good fortune on its arduous, Xenophon-like journey. If all goes well, I will decant the beer into large bottles for conditioning, before surrendering it to the vicissitudes of time and the Brownian motions of chemistry.

How will I bear to wait so long before tasting this beer?

Well, my cellar is deep and dark and there is a lot to be said about the peculiar satisfaction of a pleasure deferred. I like to think that my years as a journalist writing about the way pension funds invest their members’ wealth will stand me in good stead, too. Those years made me a diligent saver, with an amateur’s enthusiasm for the dark actuarial sciences.

The spreadsheet I rely on to guarantee my financial wellbeing models the lifelong evolution of my wealth. It shows a peak at my chosen age of retirement from productive, remunerated work. Before that date, it diminishes as time runs backwards towards today, based on assumptions about my rate of saving, my investment costs and returns, and inflation; after my retirement date, it diminishes as time runs forwards towards eternity, based on new assumptions about my rate of expenditure. The ink turns red as I pass one century.

As such, the road of my life – la cammin di nostra vita –  is figured as a hill, rising, peaking, falling. It seems an apt metaphor. A person who is past his or her most (economically) productive years is, after all, described as “over the hill”.

Research suggests that life is a valley, however.

Take, for example, the paper published by David Blanchflower of Dartmouth College and the Bank of England, alongside Andrew Oswald of the University of Warwick, in Social Science & Medicine Vol.66 (April 2008): “Is Well-being U-shaped over the Life Cycle?”

Using data from surveys that asked randomly-sampled populations questions such as, “On the whole, are you very satisfied, fairly satisfied, not very satisfied, or not at all satisfied with the life you lead?” Blanchflower and Oswald found evidence that “a typical individual’s happiness reaches its minimum for both males and females in middle age”. Thereafter, as we get older, we tend to get happier.

This evidence holds true across 72 different countries, and was corrected for cohort effects (different generations living through good times and bad times). The economists presented similar results based on other measures of wellbeing, such as reported mental health or anxiety and depression.

In other words, the mid-life crisis that sent Dante off on his voyage through the cosmos is deadeningly, mundanely normal, and thankfully temporary.

So much for the “dismal science”.

Perhaps I ought therefore to invert my wealth hill, and regard it as a wealth valley?

There is something about saving – or, more precisely, saving over periods longer than the cycle of the seasons of the year – that goes against nature. Working hard for compensation that is surplus to one’s here-and-now requirements, creating wealth and then proscribing its use, has a perversity about it. No wonder we feel so depressed and anxious while we are doing it.

Similarly, the fact that we climb out of the shadows of the valley of wellbeing by virtue of descending the hill of our wealth is not some unfathomable paradox, and still less a reflection of some pious truth about the purity of the poor life. We become happier as our wealth diminishes because we are consuming it – the natural end of all economic activity, indeed the only reason to be economically active at all.

Is this time of consumption a time of happiness, though, in truth?

Is it not merely a time of relief?

That question leads us into the darkest corners of the actuary’s dark science.

Unlike the squirrel who buries away a pawful of nuts in order to survive the parched, fruitless months of winter, we wager a substantial chunk of today’s wealth on a vertiginous guess about the day of our demise. Even when we pool the risk, with collective pension funds and annuities, to improve our odds of putting wealth to good use, some individuals still win and some still lose around the realised mean. Some will forever forego pleasures that they might have experienced, had they just been an ounce or two more reckless.

The cry of Carpe Diem! warns us that we may not make it to the crest of the hill (or, more chillingly, the depth of the valley). Life is mundane and human but time, as those pious rules against lending at interest attest, is inescapably mysterious and divine.

Against the vanity of tomorrow and the day after tomorrow our conscience tells us: Memento mori.

Chemistry and beer-ageing research indicates that “Memento Mori” will reach its peak around the year 2027. I shall be approaching my mid-fifties. If Blanchflower and Oswald are correct, perhaps by then I’ll be happy enough to consider it my early fifties.

Either way, it will be late on Wednesday evening of the week of my life, according to my actuarial spreadsheet. Or mid-morning Friday, if the Biblical three-score-and-ten is anything to go by. Or Thursday noon, according to the latest life tables published by the Office for National Statistics, adjusting for my family’s health history, my Body Mass Index, my level of exercise, and my smoking and alcohol consumption.

Perhaps it is not such a bad thing that I will not be consuming this 14% ABV ale for a while.

The oldest beer I have drunk was a 2007 Vintage Ale by Fuller Smith & Turner, shared with my father, my brother and my wife on the eve of the former’s 70th birthday six months ago, a decade after I purchased it. It was worth the wait: a smooth blend of sherry, Islay whisky and almonds, a backbone of old leather, sweet but still with a hint of fruitiness.

I suppose we will toast his telegram from the King – ah! even the monarch’s gender sounds the ring of passing ages – with a mouldering bottle of “Memento Mori”. It’ll be 45 minutes after midnight on Saturday morning in the week of my life, by then.

Of course, if I put some “Memento Mori” into smaller bottles they will age more quickly, if not as elegantly. Five years should do the trick. I think I’ll do just that.

After all, I shouldn’t wish to tempt fate.