What does Leonardo da Vinci’s Salvator Mundi have in common with 113 million bottles of Orval?

At Christie’s in mid-November, Leonardo’s painting sold to an unknown buyer for $400m. That is the highest price ever paid for a painting. The same amount could buy, at the average retail price, the entire beer output from L’Abbaye d’Orval for six years.

It is difficult to assess whether or not the buyer of Salvator Mundi got value for money. If the painting is indeed a privately-held work by Leonardo, it is as close to unique as any object can be. Its uniqueness is an important determinant of its value, but also a considerable impediment to establishing its fair price: there are few objects to compare it with, and they change hands so rarely.

Indeed, the seller of the work had purchased it for one-third of its latest auction price only a couple of years ago. The dealer he bought it from picked it up from Sotheby’s for half that amount in 2013. These are not the normal vicissitudes of inflation. They do not even appear related to the work’s perceived uniqueness: its status as a genuine Leonardo has been widely accepted since at least 2011. 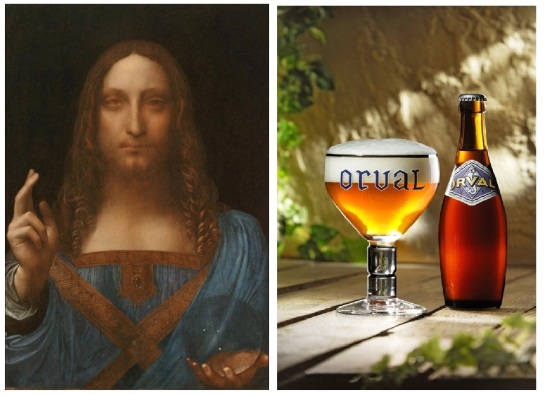 A sense of the numinous

The matter of value is especially complex for goods such as artworks that do not generate income. It is determined partly by two relatively easily-assessed variables: rarity (in this case, unique) and notability (in this case, exceptionally notable). But next to those two things we have a mess of ebbing and flowing forces: the amount of money there is in the world; how concentrated its ownership is; and the relative value of other potential stores of that wealth, from stock markets and gold, through vintage cars, wines, wristwatches and whiskies, to other works of art.

I suppose the quality of the painting has some bearing on the matter. I defer to the experts who support its attribution to Leonardo. I would struggle to consume 113 million bottles of Orval.  But neither do I think Salvator Mundi is very good.

A couple of weeks before Christie’s brought the hammer down on Salvator Mundi, an almighty fuss was breaking out at Brasserie Cantillon, and among its diehard fans on social media.

Cantillon had decided simultaneously to release 700 six-bottle cases and more than 1,000 single bottles of its limited seasonal fruit Gueuzes, Fou’foune (matured on apricots), Nath (rhubarb) and Lou Pepe Framboise (the best-quality Gueuze matured on raspberries). The alleged result, according to an anguished message from the brewery itself, was that “half of this volume was purchased by people who didn’t know anything about Lambic and even less about Cantillon […] sent by people trafficking our beers and reselling them online”.

Beer and Lambic fora buzzed with stories of Jean-Pierre Van Roy angrily booting these “mules” out onto the rue Gheude, like money changers from the temple, or abruptly scrubbing the seasonal beers from the sales board before reinstating them once the queues had dispersed.

Inevitably, a number of “genuine” Cantillon customers, some of whom had travelled long distances for this release, felt that their opportunity to purchase these beers was being taken away not only by the mules and their sponsors, but also by the brewery’s approach to releasing the bottles and policing their sales.

The first solution is tricky for Cantillon. The brewery has barely changed in a century and, as with all traditional Lambic brewers, the quality and consistency of its product, not to mention a good part of it mystique, depends upon the microflora in its immediate vicinity and in the fabric of its building. It is easy to romanticise this concept of Lambic “terroir”, but for now let us accept that, while Cantillon could set up additional brewing capacity on another site, in a fundamental way the resulting beer would no longer be a “Cantillon”.

The second solution is much simpler and easily justified.

Bottles of 2016 and even the now notorious 2017 Fou’foune change hands online for between five and 10-times the price that they command at the counter at Cantillon. Is this morally objectionable? Perhaps. But not for the reason the brewery itself suggests when it says that it wants to “give back Cantillon beers to Cantillon drinkers!”

The mules who buy these bottles at Cantillon may be ignorant about Lambic. Even their sponsors may be indifferent. But these beers are simply not valuable enough to be a viable store of wealth in the way that a bar of gold, an Old Master or even a fine wine may be. Whoever ultimately buys these bottles certainly intends to drink them.

Should Cantillon wish to offer a certain cohort of its customers first refusal on its limited seasonal releases, it could do so. The fact that it chooses not to indicates that it wishes to distribute its beers to the widest population of genuine Lambic lovers possible, which is a laudable aim.

However, its practice of releasing the beer at such a low price, mainly over the counter at the brewery itself, discriminates against those Lambic lovers who do not live near Brussels. The brewery has offered some of these beers through its own website shop but the volume was so small that it sold out almost immediately.

The mules, and the prices in the secondary exchanges that they supply, are simply the market’s way of eliminating some of that discrimination.

If there is a moral objection, it is against the excess profits that traders extract from this market. They face their own overheads, of course, but they incur very little risk in carrying and providing liquidity in these beers. A large part of these profits appears to belong properly to Cantillon itself.

If Cantillon were to sell its limited seasonal beers at four- or five-times their current price points, and offer most of the batches online, it could probably disintermediate the market, lower the median price paid by the genuine Lambic lovers who ultimately drink the beer, and raise its own profits into the bargain.

The casual buyer would be discouraged in favour of the enthusiast. Should there be any squeamishness at these larger profits – let us acknowledge that Cantillon maintains its Gueuze Museum on a not-for-profit basis – the brewery would maintain the freedom to make some of its beers available to local, loyal customers at a lower price, subsidised by profits generated from their happy, international, online clientele.

Ten years ago, the artist Damien Hirst had a group of artisans produce a platinum cast of an eighteenth-century human skull, set with real human teeth and encrusted with more than 8,000 diamonds, at a reported cost of £14 million. The artwork was given a sticker price of £50 million – which would have been the most ever paid for a work by a living artist.

The sale of the skull is shrouded in controversy. The widely-accepted account is that Hirst was unable to sell the work for £50 million, and instead recouped little more than the production costs by selling a one-third share in the work to an anonymous investment group, while retaining a two-thirds share himself. At the time, many claimed that the whole affair was a stunt to push up the prices of his other works, which were auctioned by Sotheby’s a year later for almost £112 million.

Hirst named his diamond-encrusted skull For the Love of God.

The world’s Trappist breweries follow the rules of their Order, which say that beer should not be made for profit. Returns should be directed exclusively towards furthering the mission of the Church.

It is extremely difficult to make a product that is enjoyed around the world without the potential for profit, because profit is the essential impetus that providers of capital or entrepreneurs require before they will incur enterprise risk. For profit to be absent, every member of a product’s value chain, and every provider of capital to that value chain, must be a charity. When it comes to Trappist beers, however, the only charity involved is the producer.

Only one of the Trappist breweries attempts to solve this ethical problem. Sint-Sixtusabdij, which produces the sought-after Westvleteren ales, almost always forbids the retailing of its beers anywhere other than the abbey itself or the nearby café.

Anyone who has looked online or browsed the bottle shops of Bruges, Ghent or Brussels knows this to be a despairing commandment.

Even in London, not far from where I live, a craft-beer bar will pour you a 330ml bottle of Westvleteren XII for £30. A similar bar will serve a Rochefort 10 for £7 and an Achel Bruin for £6.

Let us put the question of quality aside for one moment. Taking rarity alone as our criterion – that is, the volume of beer that each abbey produces in a year – if we take the Rochefort 10 to be priced fairly at £7, then the Westvleteren should indeed retail at around £30. But the Achel should fetch around £35, not £6.

Quality and history play a part in this pricing, to be sure. But we are also being sold an idea – an idea of the “Veblen good” encapsulated by those unlabelled Westvleteren bottles and the pilgrimage required to fetch the ale. The strange thing is that selling the idea debases and devalues the idea itself. It obviates the pilgrimage. It turns the unlabelled bottle from a symbol of purity into a risk of fraud. The market constantly teeters on the brink of disequilibrium.

None of which changes the fact that Westvleteren XII is not the best of these three beers, or that Rochefort 10 is not 500% better than Achel Bruin.

Or that other apricot Gueuzes are available.

For many years, now, it has been possible to produce synthetic “laboratory-grown” diamonds. It takes a few hundred days to “grow” these diamonds using the high-pressure high-temperature or chemical vapour deposition methods for crystallising pure carbon in three-dimensional isotropic form. They are chemically, physically and visually identical to natural diamonds and only distinguishable via infrared, ultraviolet or X-ray spectroscopy.

You would think that getting a good price for a painting by Leonardo da Vinci would be as simple as overpaying for a slightly infected coffee-infused double IPA from your local craft brewer.

Apparently not. Apparently, there’s an element of science about it.

This is how an object from the Italian Renaissance found itself up for auction in a sale of post-war and contemporary art. This move by Christie’s was “inspired”, according to one art dealer, because contemporary art is “where all the big money is”.

The old dinosaur Salvator Mundi benefited from the halo effect of all that modern stuff and the oligarchs it attracts, even as it fetched a price of which a Cy Twombly owner could barely dream. 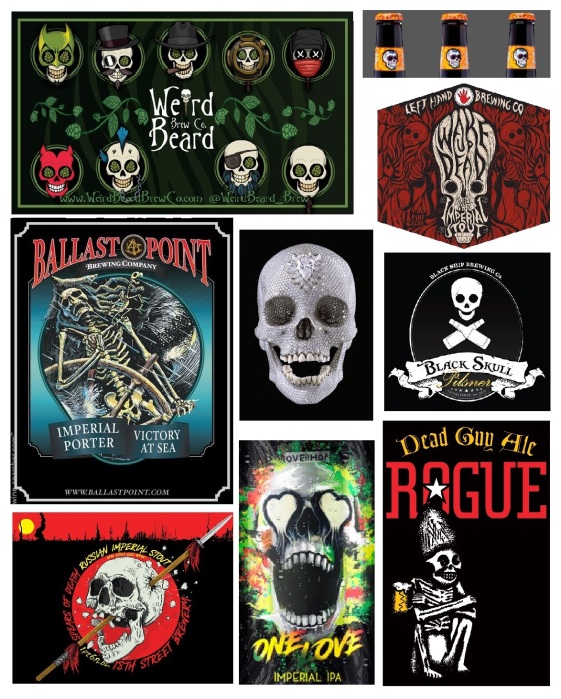 No wonder seasoned national brewers and cynical “macro” multinationals are putting skulls on their bottle labels, publishing blogs, doing collaborative brews – generally getting tattoos and embracing the whole “fake craft” thing. If there’s one thing big business knows well, it is how to follow the money down the path of least resistance; to recognise an idea that is sufficiently nebulous to be appropriated without being utterly debased, in a queasy new market equilibrium.

It took us a surprisingly long time to notice that the “intrinsic” theory of value, which says that goods should change hands at a price that reflects the cost of their production, was not a good predictor of what happens in the real world. The development of a “subjective” theory of value, which took into account supply-and-demand dynamics and risk premia, was an important aspect of the birth of modern economics in the 18th century.

One landmark in that intellectual development was an Essai sur la Nature du Commerce en Général, published in 1755. By happy coincidence, its author was a banker, speculator and Mississippi bubble blower by the name of Richard Cantillon.

3 thoughts on “The Price of Everything”