Some weeks ago I received a message from Dany Prignon of Brasserie Fantôme in Soy. Well, to be scrupulously accurate, my wife received the message because she does the social media in our household. “Have you drunk any more Fantôme on your London balcony?” he asked.

No, Monsieur Prignon, I cannot say we have drunk more Fantôme – although it would be just the ticket for these heat-shimmering summer days. But what I can say is that we have been drinking some of my own beer on the balcony!

Why was Dany Prignon – the George Best of Belgian brewing, its Richard Feynman, its Doctor Who, if you will – enquiring after my drinking habits? And how did that beer of mine go down?

Two years ago my wife and I took our summer holiday in Wallonia. We stayed in Bouillon, La Roche-en-Ardennes and Rochefort, enjoying the green rolling hills, the spectacular caves, the medieval castles, the ham, the beers, and the breweries that this underappreciated region has to offer.

One of the many highlights was our visit to Brasserie Fantôme. Not so much a brewery as a shed by the side of the road in a tiny village called Soy, this is one of the world’s unlikeliest beer-tourism destinations, but also one of the most unmissable. For many people, Dany Prignon represents everything they love about Belgian, and especially Wallonian, brewing: its anarchic approach to ingredients and craft; its rootedness in community; and its recognition that tradition means very little unless you are making it new today. 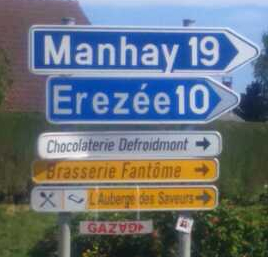 From our base in La Roche, glowered over by the ruined castle that houses the ghost depicted on the Fantôme beer labels, we took a bus up to Hotton. From there we walked the five kilometres along the Rue Grand-Mont to Soy, excitement building. That is to say, my excitement was building. My wife was lamenting that we had chosen to walk up a road called “Grand-Mont”.

When we arrived, the village and brewery were quiet. We were just about to enter when Monsieur Prignon himself appeared in the doorway, uttering the dreaded words: “Je suis désolé, nous sommes fermés. Nous ouvrons à quinze heures.”

Two hours. There didn’t appear to be anything else to do in the village, so we found a bench and settled down to read.

The social hub of Soy

A little time after three o’clock, the Prignons returned from their lunch and re-opened the taproom. We happily ordered a classic Fantôme, a dark stout called Coffee Ruby, and a plate of ham and cheese.

The taproom gradually began to fill with locals, coming for their Sunday afternoon beer and a chance to mull things over with Dany. Brasserie Fantôme is obviously a shed and a brewery, but it turns out to be the social hub of Soy, too.

As we drank, the sky darkened and one of the rainstorms that keep this part of the world lush, green and tendrilled with countless rivers and streams broke over us. If we were to catch the Hotton bus back to La Roche, we would need to leave in the downpour. The choice was clear: we ordered two more beers, two bottles for our backpack, and decided to wait out the rain before walking the 17 kilometres back through the valley to La Roche.

The distant clamour of world-swaying events

The forest road had been at the heart of the “Battle of the Bulge” 70 years earlier. Repelling this last-ditch German counter-offensive in Europe was horribly attritional. It cost more American lives than any other operation during the Second World War.

Memorials to some of those lives lined the road as we neared La Roche. The distant clamour of world-swaying events somehow weighed upon the silent air of the Ardennes, decades later. We pushed on, anticipating a table weighed down by steaming carbonnade à la flamande and chalices of Rochefort 8 in one of La Roche’s cosy restaurants.

And then the rain returned. For a while the canopy of trees protected us, but soon the weight of the storm grew too much and a great vertical river cascaded over us, soaking us to the skin within minutes. Exhausted by the time we reached the town, our sumptuous feast turned into a few bags of crisps and cake, grabbed from a corner store as we ran through the driving rain and white-water streets back to our lodge.

Eight months later I sat on the balcony of my brother and sister-in-law’s apartment in London, and we enjoyed our bottle of Fantôme in the sun. I emailed Dany Prignon in my best French, with a photograph attached. “Grand merci!” he replied, urging me to post the picture onto his Facebook page – which my wife duly did.

It must have been another eight months before Monsieur Prignon enquired again, out of the blue, about our London balcony. I am happy to report that, last Saturday, this balcony saw some more beer drinking, in celebration of my own brewing skills and my brother’s considerable finesse at the barbecue.

The beer in question was a Bavarian Hefe-Weiβbier bottled on 27 April and called “Word to the Weiss”. This is a style I have brewed once before, and while I like it, I turn to it primarily for my brother. He developed a taste for it (and no little connoisseurship) when he worked in Munich a dozen years ago.

Brewing this beer was intriguing. The fermentation went well for three days but then the wort’s specific gravity stuck at around 1.016. To encourage the yeast I let the temperature drift up a few degrees. The beer sat slowly bubbling for another week before I racked it.

It looked the part

After seven days of bottle conditioning, I poured myself a glass. It certainly looked the part: a turbid, grainy amber with a thick, fluffy, ice-cream foam. But there was something odd with the aroma. The clove phenols I had hoped for were there, but no sign of the sweet banana notes from isoamyl acetate esters; and there was something musty and sulphurous about it, too. I cracked open a second bottle. Same again.

Concerned that I might have stressed the Weihenstephan yeast by letting the temperature creep higher, but unable to identify what the source of the unpleasant aroma might be, I decided to wait a couple of weeks before trying the beer again.

Relief! The sulphurous edge had gone, leaving me with a passable, clove-forward Weiβbier. But still no sign of the banana esters I had been expecting.

It was another month or so before we gathered on the balcony, sausages sizzling over the coals. I had come primed with eight bottles of “Word to the Weiss” and, after 30 impatient minutes cooling them in the refrigerator, my brother and I savoured the satisfying hiss as we prized two open.

As we poured, the aroma leapt from the tall glasses. Bananas! Sweet, fresh, tropical bananas! In abundance!

This is perhaps the most “on-style” beer I have created, able to stand alongside the best commercial examples. It earned my brother’s approval, with a footnote on its rather prominent hop bitterness relative to the beers that inspired it.

Almost as important, it taught me some valuable lessons in the dark arts of bottle conditioning and bottle ageing. It made me reflect upon the fact that, once in the bottle, it is not so much the live yeast that causes the flavour of the beer to evolve, but chemical reactions independent of that living component.

The carbon dioxide excreted by the live yeast is vital for giving the beer its sparkle and foam, of course, but its main work – generating the beer’s ethyl alcohol and clove-like phenols – is done during primary fermentation. The marriage of isoamyl alcohol and acetic acid to form aromatic banana esters, and the future oxidation of various alcohols and malt melanoidins into flavoursome aldehydes, take time. They can occur long after the bottle yeast is dead.

There are probably six-to-eight months of good life in these bottles of “Word to the Weiss”, nestling in the coolness of my cellar. With any luck these chemical reactions will persist over that time, rounding the character of the beer and excelling my expectations every time I open a new one.

Come to think of it, this is not unlike what happens to holiday memories – or balcony-barbecue memories, for that matter – as you open them up and revisit them. New flavours become apparent. New depths reveal themselves. The urge to brew again, and to visit again, comes over you.

Next time I must take Monsieur Prignon a sample of my beer.